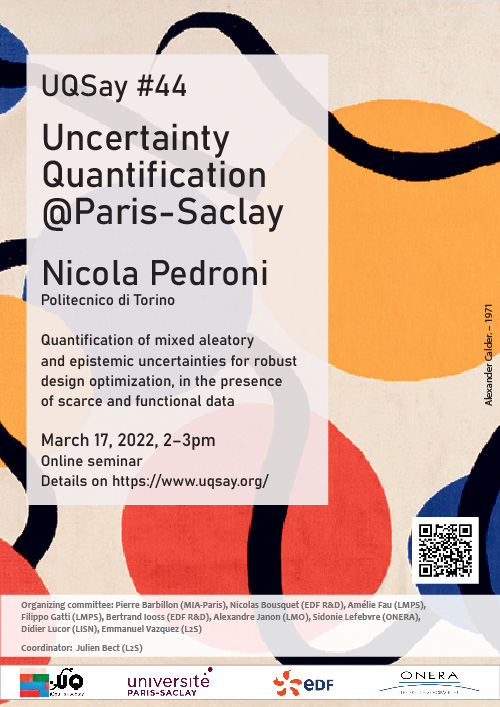 
Quantification of Mixed Aleatory and Epistemic Uncertainties for Robust Design Optimization, in the Presence of Scarce and Functional Data

The quantitative analyses of the phenomena occurring in complex, safety-critical (e.g., civil, nuclear, aerospace and chemical) dynamic engineering systems are based on mathematical models. In practice, not all the characteristics of the system under analysis can be captured in the model: thus, uncertainty is present in the values of the input parameters and in the model hypotheses and structure. This is due to: (i) the intrinsically random nature of several of the phenomena occurring during system operation (aleatory uncertainty, here represented by multivariate probability distributions); (ii) the incomplete knowledge about some phenomena and operating conditions, often due to the scarcity of quantitative data available, which may be either very sparse or prohibitively expensive to collect (epistemic uncertainty, here described by intervals or sets). The characterization and quantification of this mixed uncertainty is of paramount importance for: (i) making robust decisions in safety-critical systems applications; (ii) optimally designing and operating such systems; and (iii) driving resource allocation for uncertainty reduction.

This talk addresses the “NASA Langley Uncertainty Quantification Challenge on Optimization Under Uncertainty” with respect to two issues: (i) calibration of the mathematical model of an aerospace system and joint quantification of mixed (probabilistic) aleatory and (set-based) epistemic uncertainties; and (ii) system design optimization, in the presence of scarce and functional (time series) data (i.e., observations coming from the real system).

With reference to issue (i), the parametric Sliced Normal (SN) class of distributions is employed, whose flexibility and versatility allow characterizing multivariate data and complex parameter dependencies with minimal effort. The modeling power of SNs is tested within a frequentist (optimization-based) framework and a Bayesian inverse approach.

With reference to issue (ii), an iterative framework is developed to robustly optimize the design of the system (e.g., by minimizing the worst-case, epistemic upper bound of its failure probability). The issue is addressed by an efficient combination of: (i) Monte Carlo Simulation (MCS) to propagate the aleatory uncertainty described by probability distributions; (ii) Genetic Algorithms (GAs) to solve the optimization problems related to the propagation of epistemic uncertainty by interval analysis; and (iii) fast-running Artificial Neural Networks (ANNs) to reduce the computational time related to the repeated model evaluations. As a final remark, since the outputs of the system models of interest are functions of time, both issues are addressed in the space defined by the orthonormal bases resulting from a Singular Value Decomposition (SVD) of the real system observations.

If you want to attend this seminar (or any of the forthcoming online UQSay seminars), and if you do not already have access to the UQSay group on Teams, simply send an email and you will be invited. Please specify which email address the invitation must be sent to (this has to be the address associated with your Teams account).

You will find the link to the seminar on the "General" UQSay channel on Teams, approximately 15 minutes before the beginning.

The technical side of things: you can use Teams either directly from your web browser or using the "fat client", which is available for most platforms (Windows, Linux, Mac, Android & iOS). We strongly recommend the latter option whenever possible. Please give it a try before the seminar to anticipate potential problems.